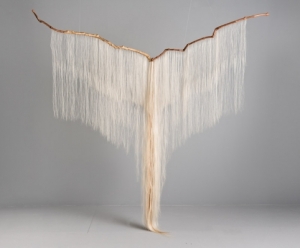 Millicent is a sculptor. She is a serious artist and a serious person. She creates with her hands sunk deep into soil and clay. She reads poetry and makes intricate and mysterious art from horse hair and stones. She is a sculptor and an artist and when I met her I felt intrigued and intimidated. Fascinated and shy.

Millicent’s pieces – whether built of wood or clay or plant – strike me. I don’t fully understand them and that is part of why I love them. It seems that they’ve grown rather than been made. As if they emerge with their own genealogy and history. I love being around the complexity and ambiguity of her work.

Years ago, Millicent created a series of clay globes – some the size of a softball that fit perfectly in a palm, others bigger than a beach ball that could be seen from a distance. Each one perfectly round with imperfectly smoky glaze. Like the eggs of mythical birds, she displayed them in gardens and studios and writer’s desks. Perched in mounds of thyme or on a rough cut slab of pine or on an espresso saucer to keep it from rolling to the floor.

I commissioned two of her extraordinary extra-large globes for our garden. One nestled perfectly in a triangle of hostas. Another I kept moving around until it found a home under to a dwarf pine behind some columbine.

When it was time for her to go, she took my hand and led me to a bed of Solomon’s Seal by the front door. We had walked around it for half an hour, but I hadn’t seen the basketball-sized globe that she had secretly set by the front step. 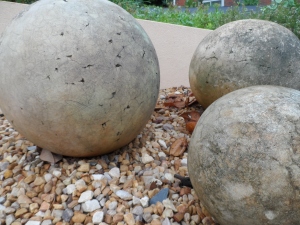 “This is for you,” she said. What she didn’t say, or maybe she did, was that I hadn’t seen it.

There is a hotly disputed story that natives standing on the shore were unable to see Columbus’ ships on the horizon. Their eyes had no expectation of such things. Their brains had no stories for them. So the ships remained invisible until someone pointed them out.

I felt abashed once Millicent pointed out her Columbus globe. I was the mindfulness teacher who had mindlessly walked past the new addition to the garden. Even so, there was magic in her revelation. A gift both literal and figurative. The difference between looking and seeing.