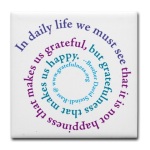 In celebration of Thanksgiving (what I consider to be the greatest holiday evah), I’m offering a two-part post this week with two gratitude practices that have amped up my happiness and peacefulness recently.  If you missed it, Part I:  Gratitude Feast is here.  And without further ado, here’s Part II!

My Gratitude Fast is the practice of going complaint free:  a complaining fast.  A movement begun by Will Bowen, A Complaint Free World, is an idea that has reached millions of people worldwide.   The practice is to wear a bracelet on either wrist and when you catch yourself complaining, criticizing or gossiping, you move the bracelet to the other wrist.  The complaint free challenge is to go 21 consecutive days without moving your bracelet.  I started on October 26 and so far, the longest I’ve gone is 4 days.

When I tell people what I’m doing, I usually am met with a mix of interest and some defensiveness.  People often say that they think complaining is a good thing, to let off steam.  My experience is that I’ve never once felt happier, more peaceful or more connected after complaining.  I did it so often, though, that I often didn’t know that it felt yucky.  Complaining can also be addictive as a way to get sympathy, feel included in a group, or get attention.  What can happen is that the habit of complaining can lead to a lot of time spent looking for a grievance.  The other question people ask is, “If I think it, does it count as a complaint?”  The short answer is NO, you only move your bracelet if it comes out of your mouth.  The longer answer is that the fewer complaints I speak, the fewer I think.  Complaining is a habit of both word and mind.  For more details about the practice, go to the Complaint Free World site and/or see the page under Helpful Info at the left for the Complaint Free Basics.

The other big question is, “What is a complaint?  Maybe I’m just stating the facts.  And what does criticizing and gossiping have to do with complaining?”  Complaining is any expression of pain, grief or discontent — with you, or anyone else or anything (Frank caught me the other day complaining about the cat).  If I’m just stating the facts, there isn’t the edge of discontent or desire for something to be different than it is.

Gossiping is another way that we criticize and show off.  Any time we say something about someone who isn’t present, that you would not say in front of them, or that they would not take as a compliment, is a complaint about them (and also a way that we sing our own praises).

Complaining, criticizing, and gossiping are variations on the same theme.  When it comes right down to it, I know that I’m doing one of them by how it feels.  If it feels kind of sticky and sludgy after I say something, I know I’ve got to move my bracelet.

In the short time that I’ve been doing the complaint free practice, I’ve noticed some things.  I realize that I often complain when I want attention or sympathy, or I want to be included (I notice this aspect in particular around politics, sports and the weather).  I notice that common places for criticizing are places where we know no one will call us on it or talk back — in traffic, while watching TV, or in the stands of sports games.  I notice that I criticize when I want to brag or get attention for doing something well.  And I gossip, when I want to look superior to someone else.  And I’ve noticed an added bonus to going complaint free.  By not complaining, I have a chance to look at what I really need or want and ask for that, rather than attempting to manipulate in a sideways effort to get it.

Many of us complain (or “kvetch”) often and habitually.  Some of us are even proud of it!  (Thanks for the great video, Suzanne!)  I didn’t think of myself as a complainer (other than Jewish mothers, who does?), and I was shocked at how often I do it.  One benefit of a complaint fast for me is noticing how much there is to be grateful for when I’m not searching for a grievance.  And I notice the blessings even in annoying or inconvenient situations.  The greatest benefit, though, is that I feel noticeably lighter and happier since I’ve become more mindful about my complaining.  It is as if I was regularly eating poison and someone said, “You know, you’ll feel a lot better if you don’t eat that.”  So I stopped eating it (mostly) and, lo and behold!, I feel great.

I would love it if you would join me in the Complaint Free Challenge!  Say the word, and I will add you to the Complaint Free Community of Friends on Facebook, or just keep in touch and let me know how it is going for you and what you are discovering!

Happy Thanksgiving, everyBody.  I am deeply grateful for all of you.